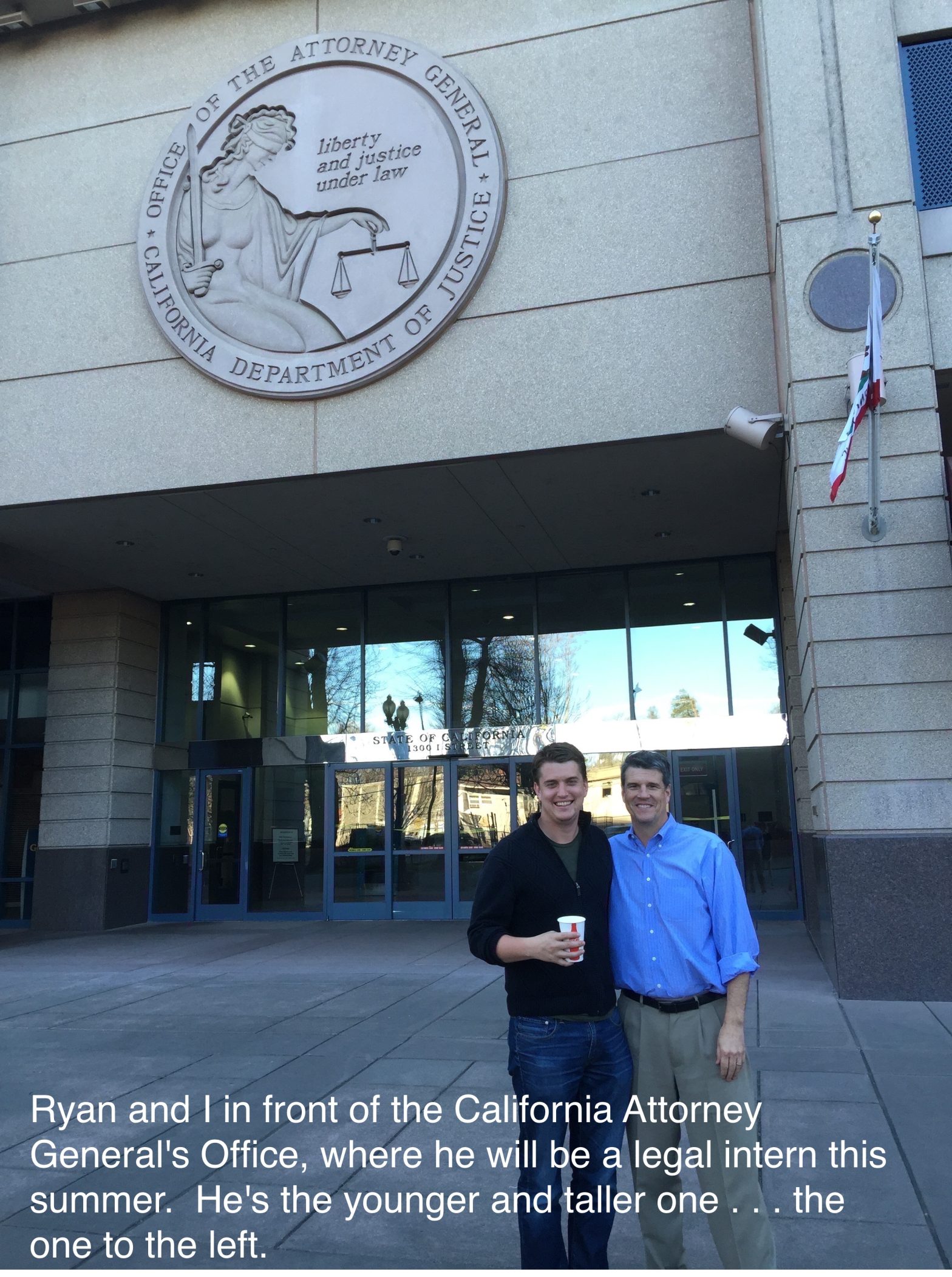 I went with my son Ryan today to his Constitutional Law class in UOP’s McGeorge School of Law taught by Distinguished Professor Brian Landsberg.  The class was one hour and twenty minutes long and was fascinating on a number of levels.
First and foremost, the dominant style of instruction is Socratic.  This is the second class I have experienced at McGeorge, and as we all have heard, law students indeed have to be on their toes.  Ryan told me once that the idea of Socratic teaching is to push the student to think deeper and deeper until they get to a point where  they can no longer answer.  The point is not humiliation, but to witness thinking and to truly check for understanding.  Even if a student is answering for a long time, other students are listening because they know they may be called upon to build upon certain points.  Having seen it twice in action, I am a fan.
There’s a lot of talk in education literature about “flipping the classroom.”  Socratic teaching certainly is that, at least to a degree.  In this lesson, the professor probably had a fifty-fifty mix of lecture and Socratic questioning.  In the class I saw last year, it was almost entirely Socratic.  Students are expected to learn the facts at home or in the library, then expected to delve deeper in class.
I saw two instructional elements beyond Socratic teaching that struck me today .  One of my beliefs is that in elementary school, we pay much attention to how each student learns and to finding all ways possible to make sure each student learns to his/her maximum potential.  In college, much attention is paid to delivering the content that needs to be learned, with little concern for how much each student learns, other than assigning a grade to the teacher’s assessment of each student’s learning.  The continuum goes from elementary to college, with high school typically being more on the collegiate side of the spectrum, and middle school not being far behind.  I am generalizing of course, but that is my belief.  Much of our education reform efforts have been to help all of us to focus more and more on finding ways to ensure that each student learns.
What’s my point here?  I love seeing when innovations in teaching and learning that began in K-12 make their way into college.  Today, Professor Landsberg had a series of questions that were on a PowerPoint presentation.  I asked Ryan why he wasn’t writing the questions down, as I’m sure he will see some of them later.  (Ryan’s memory is pretty incredible – the entire amount of notes he’s taken in his life would not fill a 200 page spiral notebook.  He’s done OK, so I guess I should just admire it.  He took no notes in class today by the way, and I know he retained it all.)  Ryan told me that the professor posts all of his presentations online.  That is fantastic!  I know it seems like common sense, but it’s new, and it’s still not embraced by many.  When I was in college, students had their own not-so-clandestine-and-by-the-way-for-profit note taking services.  It was radical.  When I first taught high school history, my notes were gold.  Why would I give students the notes and my questions when that would make it so easy for them to ace the tests?  Seriously.  That was my logic.   Doh!  Our only goal should be to give students every possible way to make learning as easy as possible.   Having the notes totally accessible is one great way of doing that.
The second technique I saw was the use of response clickers in class.  On four occasions, Professor Landsberg asked students to select A, B, C, or D to a preselected question.  What is he doing?  Checking for understanding!  He has been focused on three or four students during the Socratic teaching, and this is his way to making sure the class at least has a good working understanding of one central point before he moves on.  The results come up (anonymously) and he can see that over 90% of the class gets the main point.  Then he can move on.  If the percentage were lower, he could go back and reteach.  Awesome. 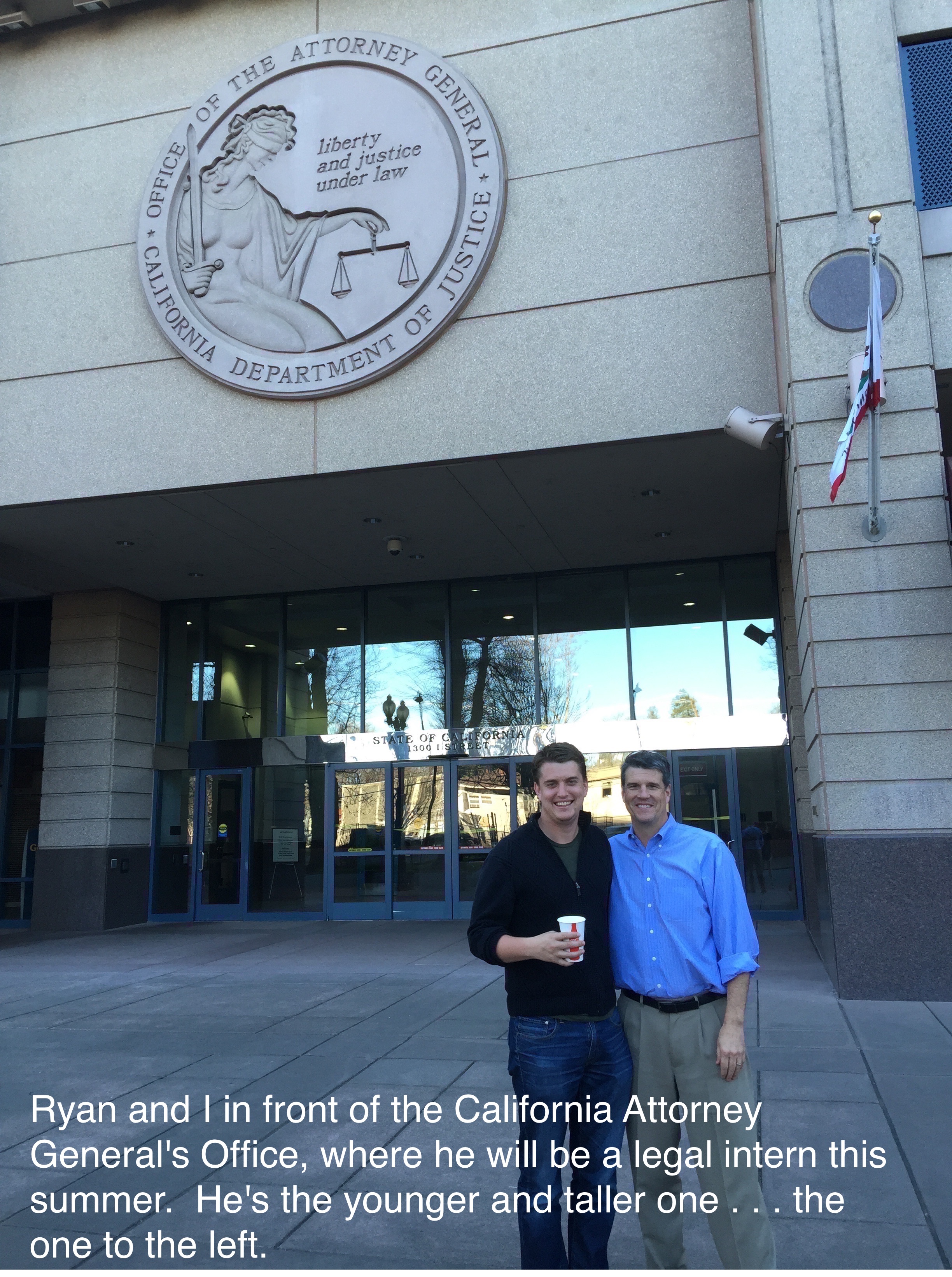 Finally, it is powerful to see students dedicating time and effort to truly understand our Constitution, and looking at all of the ways that it impacts our nation.  The entire focus of today’s class focused on one tiny section of Article I, Section 8 of the US Constitution.  It can be a little dry, but it reminds me that our nation is built on an amazing document that has the full attention of some of the best and brightest in our nation and the world.  As it should be.
And that concludes my report on being a student in a law school class today.
Thanks for reading,
Mike Matthews
Post Note: Here is Ryan and the Law Review Leadership Team from McGeorge School of Law.  He was one of the editors.  He’s on the far left. 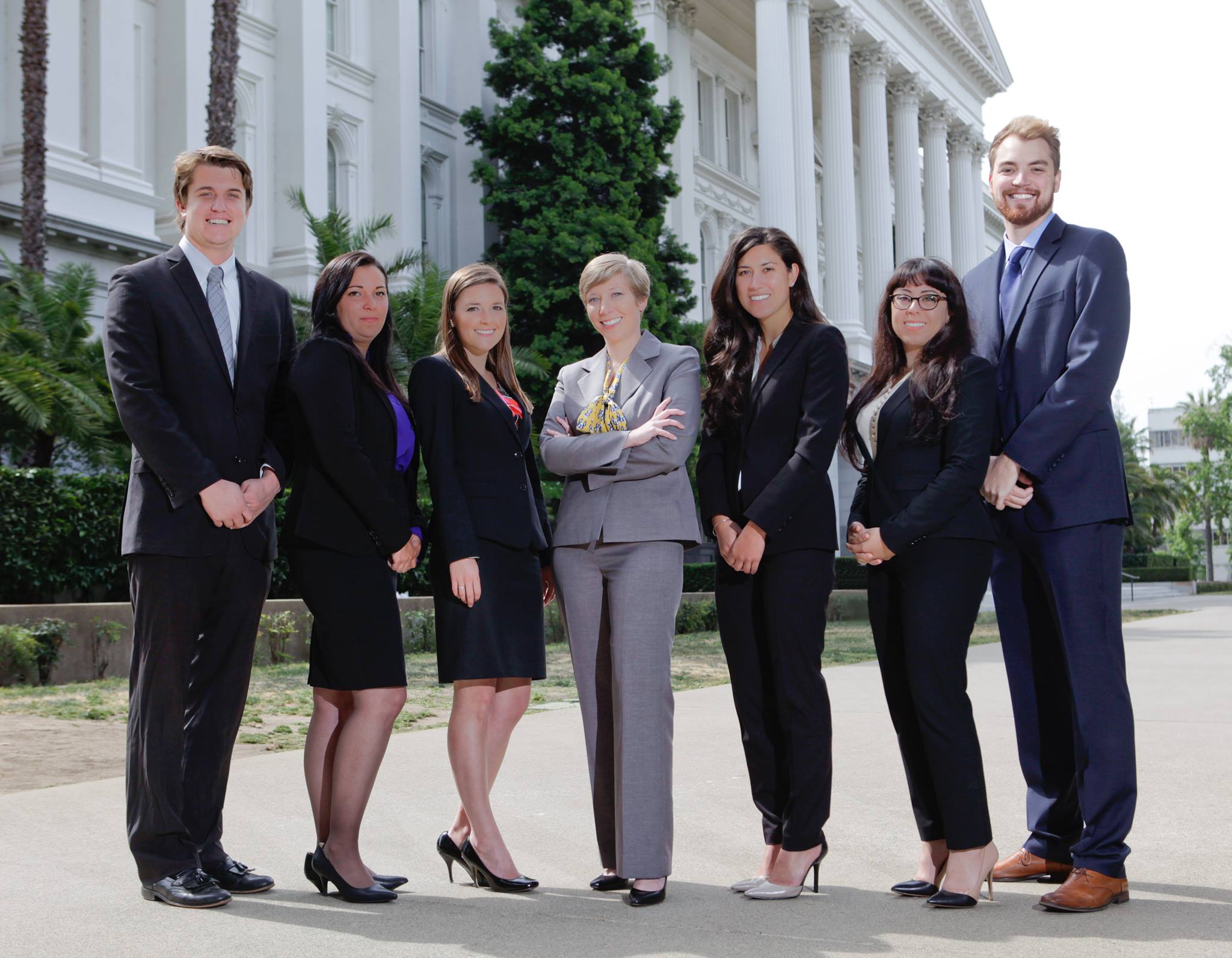