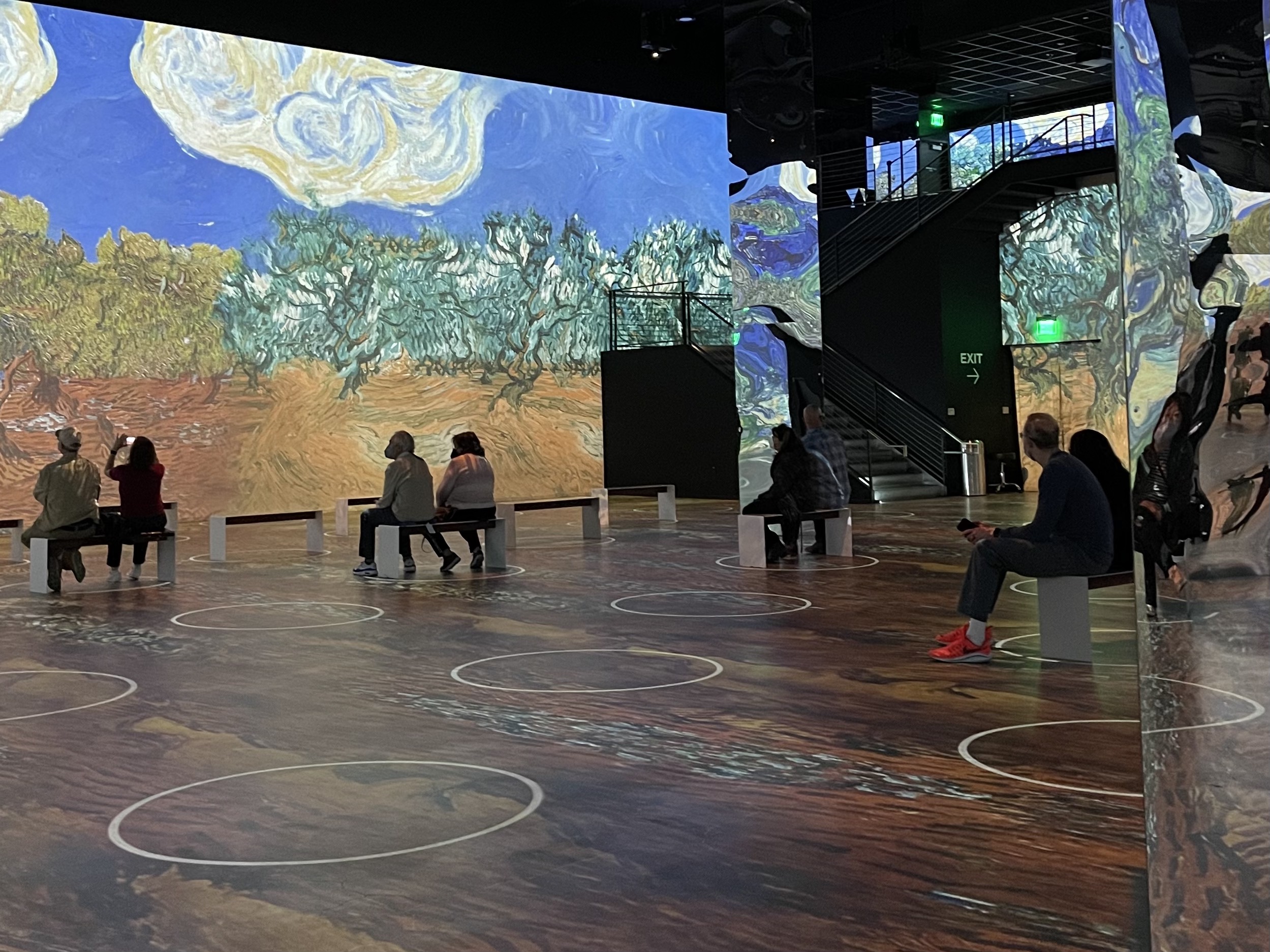 The great thing about Los Angeles is that it has everything you could ever want in terms of culture, sports, food, entertainment, and beauty. The lousy thing about LA is that if you have to go anywhere during rush hour or on the weekend, traffic can be b-r-u-t-a-l. That’s especially true if you live where I live, which is on the far northwestern edge of LA County. Going to the Hollywood Bowl to watch a concert is an unforgettable experience, but I usually have to spend the first part of the event calming down from the 2-hour plus drive that it took to get there. Same for Dodger games or Laker games. So, with a few rare exceptions, my ventures away from home have mostly gone in the opposite direction from LA.

But here’s the thing. I don’t have to go to these places during rush hour or on a weekend any more. This week, I went to the Van Gogh Immersive Exhibit that’s been on display all around the country. I was able to get to Hollywood in less than an hour, had my pick of parking places, and was in line early for my 11:00 entry time, all without having to use any of the calming techniques I usually use after driving through traffic hell. I met my fellow retired superintendent and friend Pat there, and we had a blast experiencing the exhibit with all of the other patrons who also had to show proof of vaccination to get in. I love the vaccinated-only entry. After experiencing the exhibit we had a burger and a beer at the Stout Gastropub (spectacular burgers with safe, open-air, vaccinated-only seating), and then I was home by 2:30. Crazy!

One hour in a museum seems like the perfect length of time for me. My attention span wanes after that, and I’m ready for something different and more active – like a burger and a beer. But maybe I should think about it differently. I spent six hours in a Honda dealership recently, waiting for a super fun electrical problem to get analyzed. But I had my laptop, got a lot of writing and thinking done, had lunch at a nice Jamaican restaurant close by, and actually had a productive and interesting day. If it takes more than an hour to fully experience the exhibits in a museum, I can take a break, write, think, walk, then engage in part two. As long as I don’t get caught in the 3:30 to 7:00 rush hour, I’ll be fine.

Maybe I will do this enough to actually be able to say I know Los Angeles. I have lived in cities before where I was able to take advantage of all they had to offer. I took a semester-long break (Stanford called that “stopping out”) from my year-abroad college experience in West Berlin, made enough money as a street musician to live, and was able to frequently visit the museums and other spots in both West Berlin (modern and wonderful) and on the other side of the wall in East Berlin (gray and depressing, but historically fascinating). I had no money at all (a byproduct of my talent level), and I came back to the US about 25 pounds below my high school weight, and that was in spite of not cutting my hair for a year. My mom cried when she saw how I looked. Near starvation aside, I was as alive and free as I have ever been in my life. I don’t want all of that freedom, but feeling some of it again is a welcome addition to my life.

I also lived in San Francisco for a short time, and their spectacular public transportation system let one go anywhere anytime, and I took advantage of it regularly. As a bonus, San Francisco is compact enough to be able to walk to many destinations. I was teaching full time (including summer school) while I lived in San Francisco, so I did not have all the time and freedom I had in Berlin, but because everything worked so well, I could take advantage of what The City had to offer. I know there are issues in San Francisco right now. BART (their subway) rider satisfaction is lower than ever, and the homelessness is more present than ever. But I would live in San Francisco again in a heartbeat. It is magical. What is not magical is increased homelessness everywhere. We have 25% of the nation’s homelessness here in California, and it is quickly turning into one of the nation’s biggest challenges. Any solution is both costly and unpopular, and will take extraordinary leadership and courage.

In the words of my old masters swimming coach, Steve, “End of the rant, and back to the workout.” When we were exhausted from the swimming set we just finished, we welcomed all of those mini-rants, giving us a breather before he inflicted yet another painful set on us. Back to LA!

Los Angeles is not a walking city, and I have given up on public transportation ever being viable here. I hope that I live long enough to see the day when self-driving cars rule the streets, merging and cooperating like bees (The Bee Movie with Jerry Seinfeld showed how traffic should work with advanced, fully focused, and non-enraged beings in charge). We are too selfish and we make traffic worse by hurrying and not letting people in, or by cutting people off so we can get there faster. We are painfully slow because too many of us are trying to go faster.

I don’t think our species’ focus will ever be as purposeful and team-oriented as bees, so bring on the self-driving cars. But until then, I’ll be using my increased freedom to drive myself to experience really cool stuff when everyone else is off the road. I’m on it.