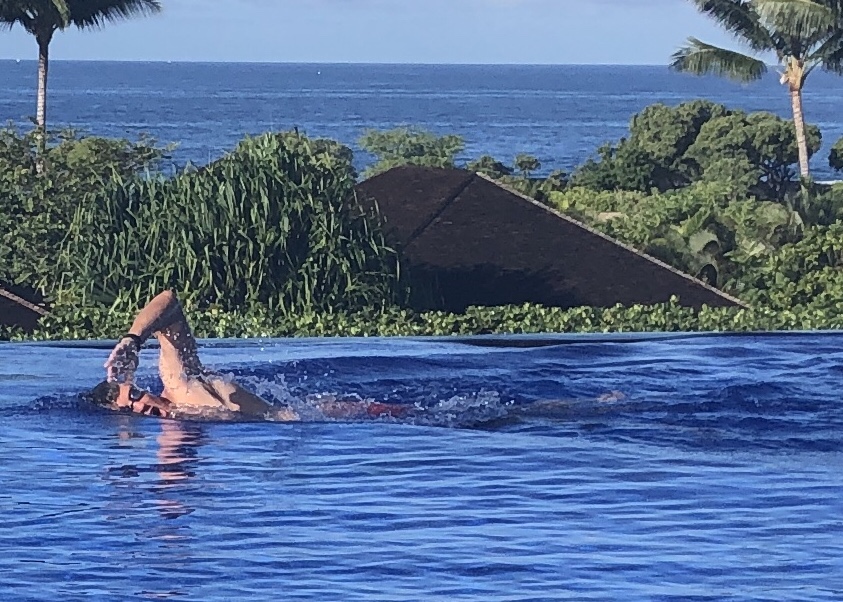 I remember my first day of swim practice, way back when I was six years old. It was at the Little Rock Boys’ Club and Coach Brooks led the workouts. It was my first experience in a locker room, where I quickly learned that even though I was small enough to do it, you don’t change clothes inside the locker. You just put your stuff in there. That was a good learning moment right there. And I was mostly able to ignore the laughter.

Coach Brooks was a motivator. He did not believe in much rest between laps. He kept one of those fat pencils behind his ear, and if you hung too long on the edge of the pool, he would use that pencil to remind your hand it was supposed to be pulling through the water. I later switched to Coach Miller at a different facility. Mom or Dad would drive me to practice (thanks Mom and Dad!), sometimes very early in the morning, and I improved enough to start placing in a variety of meets. Eventually, I was swimming four hours a day as a ten-year-old, and doing very well.

I remember getting ready for a big meet down in Dallas when I was 11 years old, and I expected to be among the best in my events. My youngest brother Bill chose the week of that meet to annoy me, as only he can. (Yes, I meant to use the present tense.) When we Matthews tell jokes, our strategy is to keep hammering on a funny line until everyone is sick of it, and only then do we really start to lay it on. I’m pretty good at that, but Bill is a Jedi Master. Anyway, I may have tried to convince him to stop tormenting me by hitting him in the head. For those wondering, Bill and his hard head were fine, but I broke my hand! I had to drop out of the meet, and after six weeks in a cast, I quit swimming. I got back into the pool competitively in high school, but I never worked very hard. I could go pretty fast for 50 yards, but after that, I was pretty much exhausted. Sometimes I wonder if I could do it over again, should I have gotten back in the pool after my cast came off and continued that intense focus on swimming. As I was taught by the owl with the Tootsie Pop, the world may never know, and my swim career peaked at the ripe old age of eleven!

Forty years later, I started swimming with a coach again, when I joined my first masters swim group in 2013. They practiced at Loyola Marymount near the LAX airport. Masters swimmers are some of the most positive people I’ve ever been around. Also, a little crazy. We jump into the water early – workouts start at 5:30 or 6:00 a.m. We all love our coaches who are there to entertain us, motivate us, and of course make us suffer. There’s way more camaraderie and conversation in swimming than most people would expect. We swimmers joke and laugh, and then push ourselves to keep up with, or edge out, the swimmers in our lane or the ones adjacent. It’s not a competition, but it’s totally a competition. Unfortunately, the LMU workouts closed down with COVID in March of 2020, and still have not restarted. I miss coaches Bonnie and Clay. I miss my lane mates Wayne, Kat, Brian, Bob, Nader, Shauna, and so many others from our workouts, even Jim and Karl.

I’m swimming at a new place now, with Coach Nancy at the helm. On my first day with Coach Nancy, she said, “Your swim techniques tell me you might have been a decent swimmer back in the ‘70s.” Ouch. Just because she’s right doesn’t mean she had to say it. Or did she?

I turn 60 next year, and as anyone who does age group competitions knows, aging into a multiple of 5 means that you move up in age groups. When I do future meets, I’ll swim against people aged 60-64. You’d think I might do pretty well in that age group, except, there are some really fast sexagenarians out there! (At least we’ll all be called sexagenarians.) So … if I want to be faster and more competitive, and if I now have a little more time to work on that, how do I go about it? And by the way, swimming isn’t the only thing I want to improve on – I want to be a better golfer, guitarist, writer, and chef. But let’s focus on swimming, shall we?

When I was taking Dawson out to Colorado, we listened to several podcasts. One that put Dawson to sleep was the Freakonomics podcast on how to get better at anything. It was all based on the research by Anders Ericsson. He’s devoted a good part of his life to this topic, and I read his 2016 book, Peak: Secrets from the New Science of Expertise.

What has Ericsson found?

I’m determined to use these approaches to set the bar high, and I know I cannot do it alone – I need the support (and the competition) from my fellow swimmers, as well as the guidance, hard feedback, and encouragement that my coaches will provide. I’m grateful for all of the coaches I’ve had through the years – the ones who cared enough to push me, to overtly identify my shortcomings and to be on my ass about them, and to advise me on how to overcome them. I’m building on what they gave me, and I know I am better for it.

An aside – our most effective classroom teachers embody Ericsson’s ideal and take the role of an effective coach by going far beyond the role of a giver of information.  Sadly, Ericsson believes that most teachers and doctors stop improving after just a few years in their profession, mostly because they stop seeking and using outside expertise to constantly improve.

To all of you who have read this far (and I thank you for that!), I urge you to use Ericsson’s research and commit to improving on something you’re passionate about. It is never too late.

Life is better lived when we are living to get better.

PS – During COVID, after the LMU program closed, I swam for about a year with a great group of Masters swimmers in a lousy pool in Manhattan Beach. I did not swim under coach Steve Hyde’s tutelage long, but I loved all of my time doing it. Steve has coached for about 100 years all over the South Bay. His philosophical and humorous style, including his morning rants, has charmed and pushed thousands of swimmers over the years. He would greet me with, “Are we feeling ferocious today?” Then after some kind of rant or philosophical opining, he would nonchalantly state, “Well, we are all here, so we might as well do 20 100s on the 1:30.” And then, with a little smile before the pain, off we went. Coach Steve is fighting to overcome a stroke he had last month, and my thoughts and prayers, as well as my deepest thanks, go to him and his family.