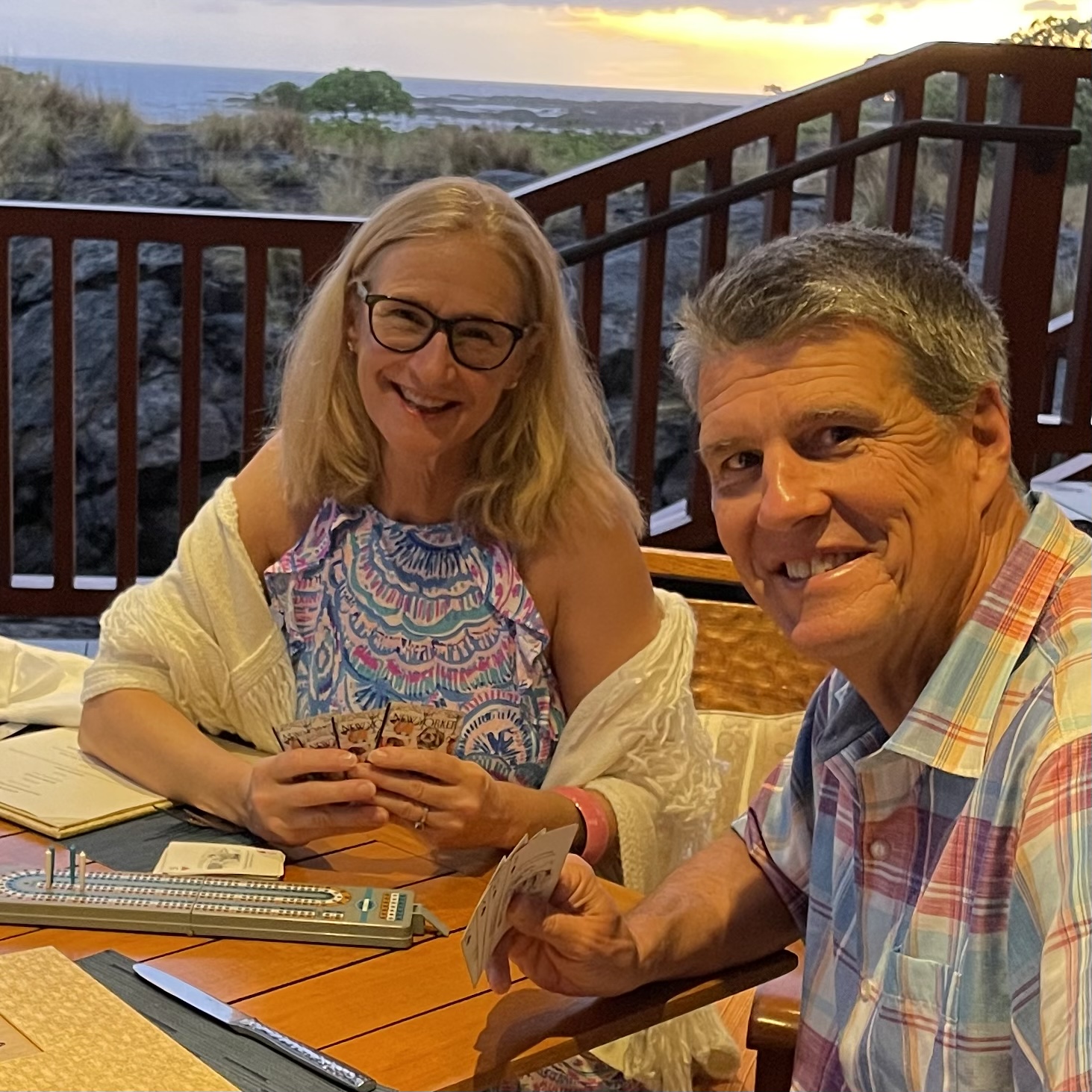 Jill and I returned home today from our Hawaiian vacation. I’m a big fan of our 50th state. If I feel far away from reality when I’m 26 miles across the sea on Catalina Island, imagine how distant I feel in Hawaii! Really distant is the answer. Even in quasi-retirement, being home means routines and responsibilities. Those all seem to melt away on a great vacation. As my friend Will says, there’s just nothing to do, and all day to do it.

Neither Jill nor I are fans of doing nothing while we are on vacation. Jill seeks out more relaxing activities, while I prefer day trips and seeing/doing what I think needs to be seen and done, but we both agree that vacation is a perfect time for games. I used to think I loved games until I met Jill. Jill’s vibrant passion for games makes my enjoyment look my old mid-size Honda Ridgeline next to Jill’s new massive Dodge Ram 1500. Disirregardless, I have long loved passing time while playing games.

My family used to vacation in Lake Ouachita (If you don’t remember, it’s pronounced Wa-shə-taw – and any day I get to use a schwa is a good day!), which is about an hour’s drive south of Little Rock, Arkansas. Our strategy was to get down to the lake on Friday afternoon, load up the ski boat, and head out to lay claim to one of the lake’s many islands. We would set up camp with a few other families and friends, and spend the weekend just hanging out. The main activity on the lake was water skiing early in the morning and late in the afternoon, when the water was as glassy as possible. There was also inner tubing behind the boat, and three meals a day. But other than that, there was a lot of down time filled with hot humid air and lake water that was not much cooler. So, what to do?

While there were always some board games, my favorite game had no board and was always played with Kent and Kirt Hyde. We would be sitting in lawn chairs, and in a slow voice, I would say, “Mr. Hyde, I’m pretty sure I can take this little rock right here, make a perfect throw, and hit the top of that tree stump.” For the next hour or three, there would be a lot of talk about the previous throw, then a lot more talk about how each of us was going to outdo the last throw. It was a less-skilled and more trash-talking version of the old Larry Bird – Michael Jordan “Nothing But Net” commercials. And it would last for hours.

When time doesn’t matter, games are a wonderful way to pass it. Great games involve varying degrees of skill, strategy, competition, and the opportunity for enjoyable conversation. I think games are far more enjoyable when you don’t hate losing. For me, I love to win, but though I won’t say I like losing, I love playing a lot more than I dislike losing. (Side note: For all of you who dislike losing more than you like playing – you’re not that fun to play with.) Over the last 25 years, I’ve played ping pong for hours with both of my sons in our back yard. Playing, talking, laughing, and always getting better. Even though my son Ryan now beats me in 19 out of 20 games in ping pong, I still love playing with him. It’s my own fault he’s so damn good. For years, because his backhand was weak and I wanted to win, I hit him nothing but backhands. Now, his backhand slam is vicious. And he still holds a lot of anger about all of those backhands I fed him, which I can always feel as the ball whizzes past me as he wins yet another point. And still, I love to play the game with him.

When time doesn’t matter, games are a wonderful way to pass it. Great games involve varying degrees of skill, strategy, competition, and the opportunity for enjoyable conversation.

During this time in Hawaii, I played a lot of golf on a beautiful course. I don’t believe there is a better game for scenery, strategy, conversation, competition, and skill than golf. I’ve played a good amount of cornhole as well. Cornhole was not around when I was a kid, but I’m sure it was inspired by experiences like my early rock-throwing contests with Kent and Kirk. It’s a spectacular game that, unlike golf, any yahoo can play. To add to the mix, Jill and I played more than a few hands of cribbage – I’m now ahead by just one game in our lifelong tally of wins. It’s closer than I would like. We met another couple in Hawaii that loves games, and while playing table shuffleboard, we learned we all love Rummikub. So we bought a set and played that for two nights. We suggested a third night and they gave us a wide-eyed but polite hard no. I know. We can be a bit much when it comes to game-playing. We met four other people who were playing “Crud” on a pool table – they taught us how to play, and now we are fans of Crud. Lots of moving around and laughing in that one. Suffice it to say, game playing was a HUGE part of this amazing vacation.

As I mentioned, game playing creates one of my favorite settings for conversations. It’s way better than my least favorite form of conversation – the cocktail party/visit in the parlor conversation. Maybe I don’t like those types of conversations just because I’m not that good at it. In those settings, the only thing we have to talk about is what we are talking about. But if I’m cooking, or the person I’m talking with is cooking, or if we are enjoying a meal, or if we are playing a game together, or walking or hiking together, or just DOING SOMETHING BESIDES TALKING, there are boundless conversational options, and I am all in and I can’t get enough of it.

I know when we get back home, the games won’t be as constant, but they will still be a fantastic part of our lives. So to celebrate games and all the ways they enrich our lives, I think I’ll go outside and throw a few rocks or cornhole bags. Just for practice.

Have a great rest of the week,