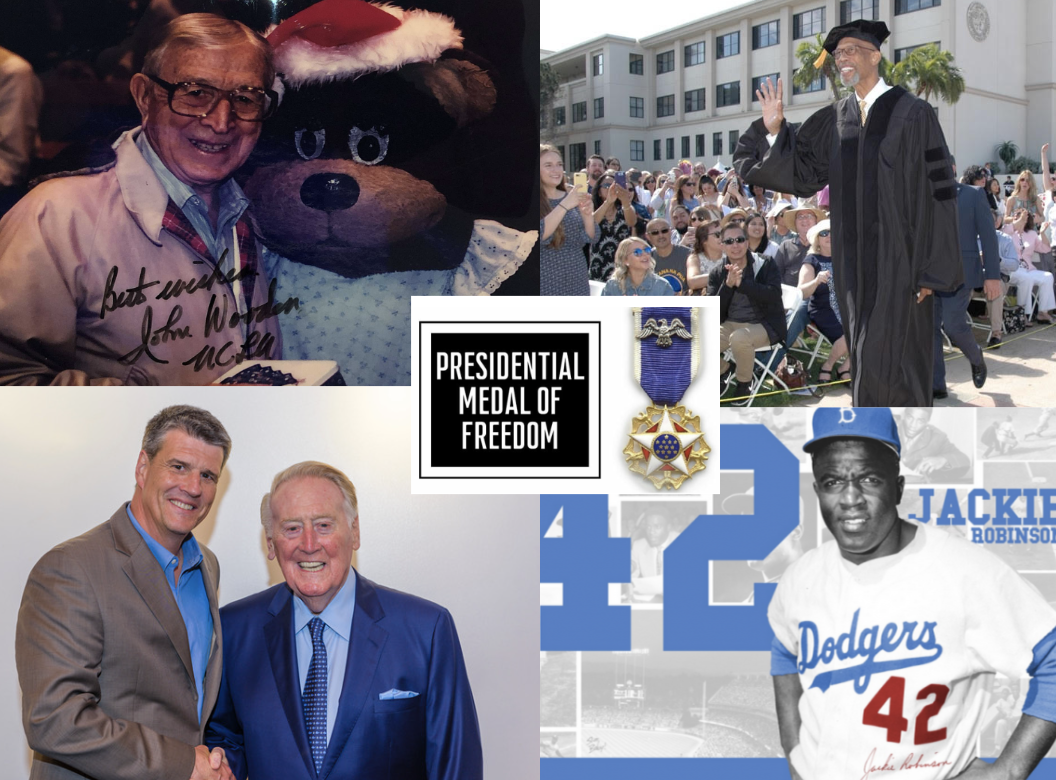 As a kid who grew up in Arkansas, I never even imagined living in Los Angeles. LA was glitzy, red carpet, rich and famous, Hollywood Stars, Beverly Hillbillies. I moved here in 1993. And as a lifelong public school educator, I was never going to be one of those celebrities. The rich and famous lifestyle, the TMZ glitz – it’s just not who I am.

But if you think that’s what LA is all about, you’re missing the boat.

The true icons of LA, the most beloved and revered, are some of the most cerebral, kind, humble, and society-improving people the world has ever known.

I started thinking about that last week, when Vin Scully died at the age of 94. The outpouring of love and tributes after his death was overwhelming. Through his humble story-telling style, his longevity (he announced 67 baseball seasons), and by staying true to what he loved, he became a close friend to so many, either through a transistor radio, a car radio, and/or a tv broadcast. And it was never about him. He was a front-row ticket to every Dodger game, a conductor for the magic of baseball, and a friend with whom you could pass the time like no other. He made the great moments even better (After Kirk Gibson hit his game winning home run – “In a year of the improbable, the impossible has happened”), and the mundane moments enjoyable (talking about the life of Socrates in the middle of a no-meaning game that wasn’t even close). He was humble, brilliant, and he loved the Dodgers, as well as LA. He made life better for millions of people seeking a connection to baseball, a connection to the community, or just a story well-told.

He was also a Presidential Medal of Freedom winner. As President Obama honored Vin, he said, “Most play-by-play announcers partner with an analyst in the booth to chat about the action. Vin worked alone and talked just with us.” President Obama added, “When he heard about this honor, he asked with characteristic humility, ‘Are you sure? I’m just an old baseball announcer,'” Obama said. “And we had to inform him that, to Americans of all ages, ‘You are an old friend.’”

Vin Scully was the essence of LA and stands among the greatest of us. And as I found, there are other Los Angeles-based Presidential Medal of Freedom winners who are true heroes and legends of our community.

John Wooden was the Ted Lasso of his day. Wait. Scratch that. John Wooden, the Wizard of Westwood, was the greatest coach of all time. President Bush awarded the Medal of Freedom to him in 2003, and just like Vin Scully, there was nothing about him that wanted attention or glory. John Wooden wanted his athletes to become humble, successful, and hard-working young men, who could be counted on to take the extra step to do what was right. Yet, his teams won like no other. (10 National Championships, 38 straight NCAA tournament victories, four perfect 30-0 seasons, 88 consecutive victories, and 20 PAC-10 championships.)

Wooden’s Pyramid of Success is brilliant and touching. It is simple, yet overwhelming. That’s why it’s perfect that Coach Lasso has it hanging in his office. It’s hard to argue with a modern-day 25 commandments. The central quote on his Pyramid is, “Success is peace of mind which is a direct result of self-satisfaction in knowing you did your best to become the best that you are capable of becoming.” He lived by that saying every day and imparted it to all who would listen. Like Vin Scully, John Wooden epitomizes LA. He was humble, cerebral, dedicated to others, and constantly worked to make the world a better place. Winning was the icing on the cake.

Jackie Robinson was another Presidential Medal of Freedom winner. President Reagan honored him in 1984. Enduring the slings and arrows of so many who were not ready for integration into America’s pastime, Jackie Robinson broke countless barriers. He thrived at UCLA and he showed millions of people how wrong they were about segregation and inclusion. He was strong, resilient, highly intelligent, a wonderful team member, humble, and a talent like no other. Jackie Robinson is also LA.

And we cannot forget about Kareem Abdul Jabbar who was awarded the Presidential Medal in 2016 by Barack Obama.  And although I did not mean for this post to become a UCLA love-fest, let’s call it like it is. Go Bruins! No one has scored more points in the NBA than Kareem. Few have had college careers like him. He is an intellectual, a man of deep faith, and somehow found a way to humility in spite of his greatness. Kareem spoke at my nephew’s graduation ceremony at LMU in LA. I included the points of his speech below, but just know it reflects on humility, happiness, and the simplicity of living well and making a difference. And as a fellow blogger – (with the exception of talent and grace, and height, and, well, lots of other stuff, my blogging colleague Kareem and I are basically the same person) – I have great respect for his writing, his efforts to celebrate what is good, and his kind yet blunt push when something is wrong. Kareem is LA too.

So, while this post started as a tribute to Vin Scully, when I saw the list of others from LA who have been honored with the Presidential Medal of Freedom, it evolved into something broader. The qualities of these four remarkable people have engendered almost a universal respect and reverence. The outpouring that we all witnessed after Vin Scully’s death has been a perfect example of that respect. All four earned that very rare form of admiration not through the glitz and red carpet that typifies LA for so many, but through the values of kindness, humility, selflessness, a commitment to continuous improvement, and a desire to improve the lives of others. I love living in a community where these are the values most celebrated and most loved.

I’m always looking for inspiration to help me lead my life better. As you can see, that inspiration is all around me. As Randy Newman sang, “I love LA!”

Thanks for reading, and keep let’s all keep reaching for improvement.

Notes on the photos:

Also – I had this paragraph in there in an earlier draft, but took it out when I realized Ashe did not stay in LA. I’m always looking to shorten my posts, but I’m kind of sorry I did not include it.

What about Arthur Ashe? (1993- Bill Clinton) Recruited by UCLA when no one else was interested, he became a citizen of the world.  He wanted to become the Jackie Robinson of tennis. I don’t know if there will ever be another Jackie Robinson, but Ashe crushed it. While winning around the globe, he made the world aware of the injustices of Apartheid, and fought for humanity for those infected with AIDS. And he did all of it in a quiet, cerebral, and remarkably fierce way. I watched the Ashe documentary now showing on HBO. It’s like Ashe – understated, non-flashy, and spectacular. Arthur Ashe is LA.