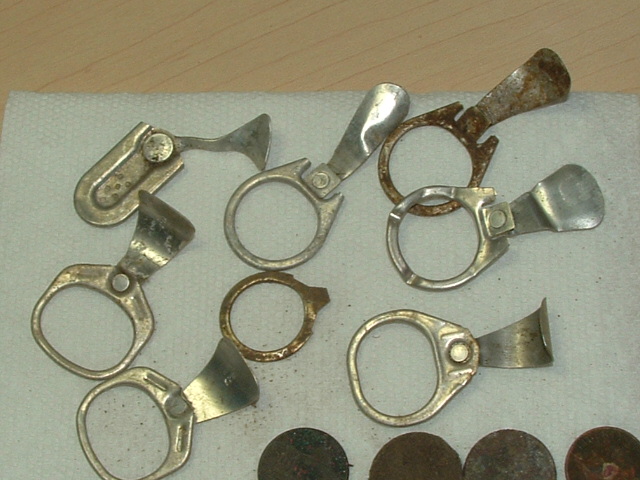 Pop-tops. Some call them pull tabs. What a lousy invention. But they were everywhere when I was growing up. Today, when you open a soda or beer can, you use a Sta-tab, which is what you find on nearly every can in the world these days. Daniel F. Cudzik was the engineer working at Reynolds Metals who invented the Sta-Tab. His picture should be on environmental flags wherever they wave. But he did not invent those until 1975.

This means that from 1959, just before I was born, until the late 1970s, when I was finishing high school, pop-tops were everywhere. To give you an idea, I saw a stat that said the estimated annual recycling weight of Sta-tabs alone was 4 million tons. And I believe it. Over my childhood years, I bet my siblings and I literally picked up at least 1 million tons of them after every trip! (I know I mis-used literally there – I just want to join almost everyone who does the same. Whenever I hear someone use literally in a sentence, I cringe, waiting for the misuse, then I am pleasantly surprised if it’s used correctly. When in doubt, follow Weird Al’s advice, and don’t commit that word crime!

What is it about free people that they feel entitled, or inclined, to leave trash everywhere? China, Singapore, and Russia have clean streets, but in those countries there’s a harsh penalty for being a litterbug. Does Ron Burgundy, who threw away a half-eaten burrito on a San Diego freeway causing Jack Black to wreck his motorcycle which then caused the near death of his beloved dog Baxter, represent all of us? And why don’t Canadians litter like we do? These are important questions! Ask anyone who’s been a public high school principal about kids leaving trash around campus- none of us can walk by candy wrapper or any piece of paper that we spot on the ground without picking it up and throwing it away. I’m not recommending caning, but come on free people!

Whenever my parents took us to a public place, an act that took great courage on their part, whether it was a campground, a picnic spot, one of the islands at Lake Ouachita (Pronounced Wah-shə-taw – and yes, I am a big fan of the schwa!) in Arkansas where we would spend the weekends water skiing, or anywhere else, we always ended the trip the same way. Our parents would start packing the car, and they would tell us to start cleaning up.  And not only the area we had been using, but the surrounding areas as well. We would each have a bag, or even a box, and we picked up every bit of trash there was.

It wasn’t stuff you noticed until you looked for it. Then it was everywhere. Pieces of paper, pieces of foil, broken glass, some occasional big items, but mostly it was two things: cigarette butts and pop-tops. Don’t get me started on cigarettes – an invention that has brought overwhelming death and misery to humanity. We picked up hundreds of discarded butts every time. But those pop-tops, they were everywhere! No wonder Jimmy Buffet stepped on one! As usual, with tasks forced upon us by our parents, we grumbled about it. But we usually felt a begrudging sense of pride when we finished.

My dad and I were reminiscing about those days last week, and as I reflected on it, I thought that the “Leave a place better than you found it” adage is a great life rule as well. I recently left my job as Superintendent of the Manhattan Beach Unified School District. I loved that job. It gave me a great sense of purpose, required all of my leadership skills, helped me to grow as a person, and gave me the opportunity to work with spectacular board members, educators, parents, community members, and students. And in return, I believe I left MBUSD better than I found it. It wasn’t by my efforts alone of course, but it was in coordination with almost everyone there. For those of us rowing together, we should all be proud of what we accomplished over eleven years in terms of curriculum, Advanced Placement success, sustainability (yes – we reduced how much trash we produced!), construction projects, and technology. For a full list click here!

As I enter this gap year after 37 years in public education, I am going to keep finding ways to employ the “leave it better than you found it” rule, even though the instrument for that may not be with a job. For the next few months, my focus will be on my health and my home, two aspects of my life that have needed a little more TLC and attention for a while. And then who knows! But I am certain that even without those annoying pull tabs all around me (thanks Mr. Cudzik for doing your part!), there are still all too many cigarette butts, and all of us have many opportunities to leave this world better than we found it.