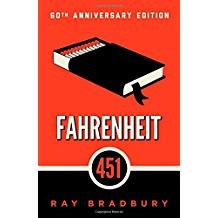 I reread this book after Ray Bradbury died. It was my way of paying homage to a great thinker. I was struck by his prediction of reality TV, something that existed neither when he wrote it nor when I read it in the 1970s, and how it sucks people in. His version of Big Brother is a government that makes the people think about trivial nonsense so much that the realities of the world are almost completely ignored. TVs influence is so strong that we don’t see the beauty and pains of the world. One great quote from Faber, the English professor in the book, “I don’t talk things sir. I talk the meaning of things. I sit here and know I’m alive.”