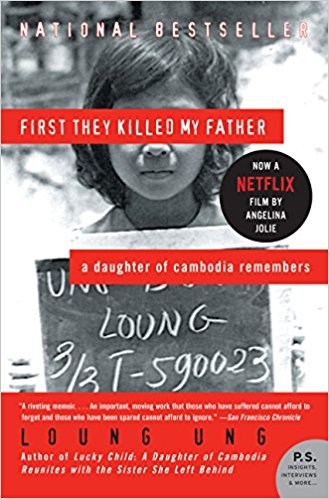 I read this book as I prepared for our trip to Cambodia in December of 2017. I had been trying to get our family to go to Cambodia for three years now. My brother-in-law has been the British Ambassador to Cambodia since 2014. He and his family have been inviting us over to visit them and tour the country, and I knew it would be a great opportunity. I finally convinced my family this year and we went in late December and early January of 2017-18. It was all I hoped it would be, both in terms of beauty and in terms of poignant history.

I know about the killing fields. I did not read the book but was powerfully impacted by the movie when it came out in 2017. One of the things that I wanted to see in Phnom Penh was the Killing Fields memorial outside of Cambodia. I thought this fairly recent book might give me some good insight into it. It did not disappoint. The book begins telling the story of a 5-year-old girl living in Phnom Penh with her well-to-do family whose father/patriarch is a former police officer and now high-ranking leader in Phnom Penh. After a brief description of their interesting and good life, all hell breaks loose, and Pol Pot’s troops come marching in to empty Phnom Penh. That was their strategy. They could not change culture in the city, so they emptied the cities. Her father knew that his plan was to kill all of the educated elite, as well as anyone associated with the former government. So their family had to say nothing about where they came from and say they were peasants and farmers. The family went from village to village, then eventually was separated.

The book tells the sad tale of the separations, of death of family members, and of survival. While in some ways uplifting, it is a horrific reminder of all that occurred.

I read more about the whole crisis. The United States was still reeling from failing to achieve its objectives in Vietnam, and the perceived sense of loss, and therefore could not support a country that Vietnam was supporting. It was the Vietnamese who came to the rescue and got rid of Pol Pot. Walking around the memorial grounds, and seeing 20,000 skulls in a central structure, complete with fractures and holes that define how they were killed, is a stunning and depressing reminder of what happened just a few decades ago. As my 15-year-old son and I walked around the grounds, we became more appreciate than ever of the importance of truth, of the need to stand up for what is right, and the frailty of democracy and government. We have to fight to keep what is good, and we are only a few bad people away from falling into a deplorable state.