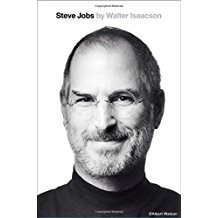 I downloaded this on the first day it was available. I said at the TEDx conference that I think Steve Jobs will go down as one of the great educational heroes of the 21st century.  He may be responsible for actually changing the way the classroom looks – something no one else has done.  By putting education into the hands of students, he may be the one who makes this change happen. Although I am “bilingual” (I used Macs and PCs interchangeably), I am a fan. I owned the very first Mac in 1984 and I have always admired the creativity, simplicity and beauty of Steve Jobs’ creations.

My big takeaways from the book. He was personally involved in so many steps. He did not delegate any final decision making. He did it all.  His standards were incredibly high, and anything that did not meet his standard was described as lousy. Finally, he thought that design was critical, and would never stop until he believed the design was perfect. This is a great and inspirational book.