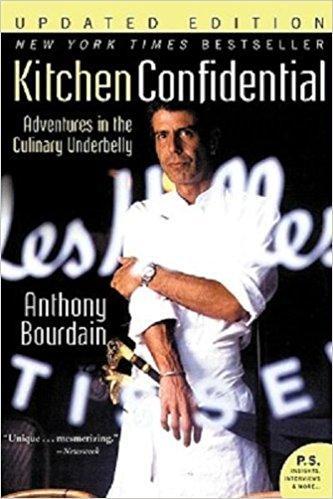 After the untimely death of Anthony Bourdain, I began to learn a lot about this TV celebrity that so many in the world were inspired by. I have to admit that I am not a very good TV watcher. I have missed so many great series. Dr. Dale recommended that I watch West Wing and I “binge watched” the entire seven seasons of West Wing in just over seven years. That’s not very good, by the way. So, I have never seen an episode of Mr. Bourdain’s show, but I do love cooking and I am fascinated by the idea of what restaurants are really like. I sometimes wonder if I can take my recipes from my cooking website, principalchef.com, and turn it into something else. After reading this, I know I have no hope of doing that at all, so I’ll just keep enjoying cooking in my backyard and in my kitchen.

Bourdain’s book is absolutely fascinating. Often profane, and drug-laced throughout the first part of his adult life, it’s a miracle that he lived through it, and a bigger miracle that any food of quality at all emerged from the kitchens he was in. Yet it did because of his sense of adventure, his love for food, and the long-lasting friendships that he developed with high-quality people in the kitchen. He tells of ill-fated restaurant dreams, of improperly managed restaurants, and of the occasional restaurants that were big successes. He is an outstanding storyteller, and an excellent writer, which, I guess, is why his TV show was such a success. If you can get past the profanity, not be turned off by his addictions, and be ready for the misogynistic nature of the kitchens he worked in, it’s an excellent read.