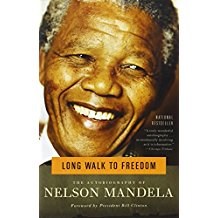 I read this book after the great Nelson Mandela died. I’m so happy that I read it, but it took me forever. I would not call it an engaging book, but it is certainly informative. I think he is one of the great figures in modern history, and an inspiration to any who face seemingly insurmountable obstacles. His long time in prison made him like a time traveler who is acutely aware of major changes that have snuck up on the rest of us. What struck me so forcefully was how small the planet had become during my decades in prison; it was amazing to me that a teenaged Innuit living at the roof of the world could watch the release of a political prisoner on the southern tip of Africa. Television had shrunk the world, and had in the process become a great weapon for eradicating ignorance and promoting democracy. You see this amazing man go from a boy in a tribal village to a position on the world’s Mt. Rushmore of global change. It’s worth the difficult read.