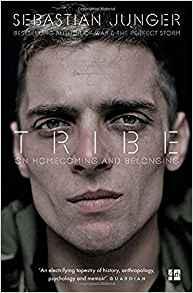 Tribe is a compelling book that speaks of the isolation and independence of humans in the modern world but particularly in the United States and the potentially harmful impact that that has on both individuals and society. The book opens with some historical accounts of Americans who were captured by Native American tribes and when they were “rescued” they did not want to return to their former communities. They felt more part of something in the new culture than in the independent and isolationist American culture they had been kidnapped from. Similarly, Sebastian Junger talks about how soldiers who return from combat situations have a difficult time returning to home in the United States. A third example he gives is of communities who were under siege and the impact that siege had on them. Whether it be the Germans’ bombing of Britain in World War II, or the Americans’ bombing of Germany in World War II. The impact was the same. The bombings made the communities stronger and more resilient than ever, and the incidences of depression and suicide went down tremendously.

Under duress, communities bond and work together, reverting to the way humans used to be prior to this movement towards isolationism. The incidence rate of PTSD in the United States is higher than any other civilization in the world, he theorizes because the isolationism here is so distant from the camaraderie and collegiality and interdependence of a combat or threatening environment. He looks at how in the last 300 years, we have gone from a totally collaborative group/tribe/community culture to a highly independent one, and our evolutionary selves have not caught up with that change.

What’s the point? He encourages us to think about how we can create our own tribes. For most of us, our tribe is our nuclear family. That’s it. Can we make that bigger either at work or in our neighborhoods or among our friend groups? It’s a thought-provoking book that has implications for team building, friendships, neighborhoods, nations, and families.